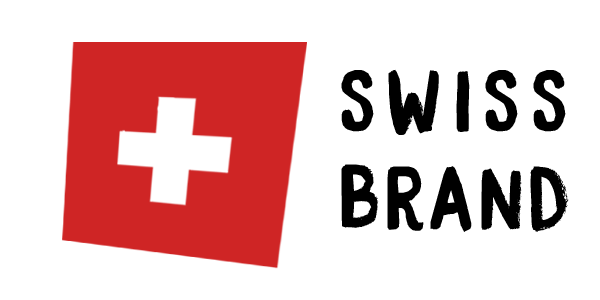 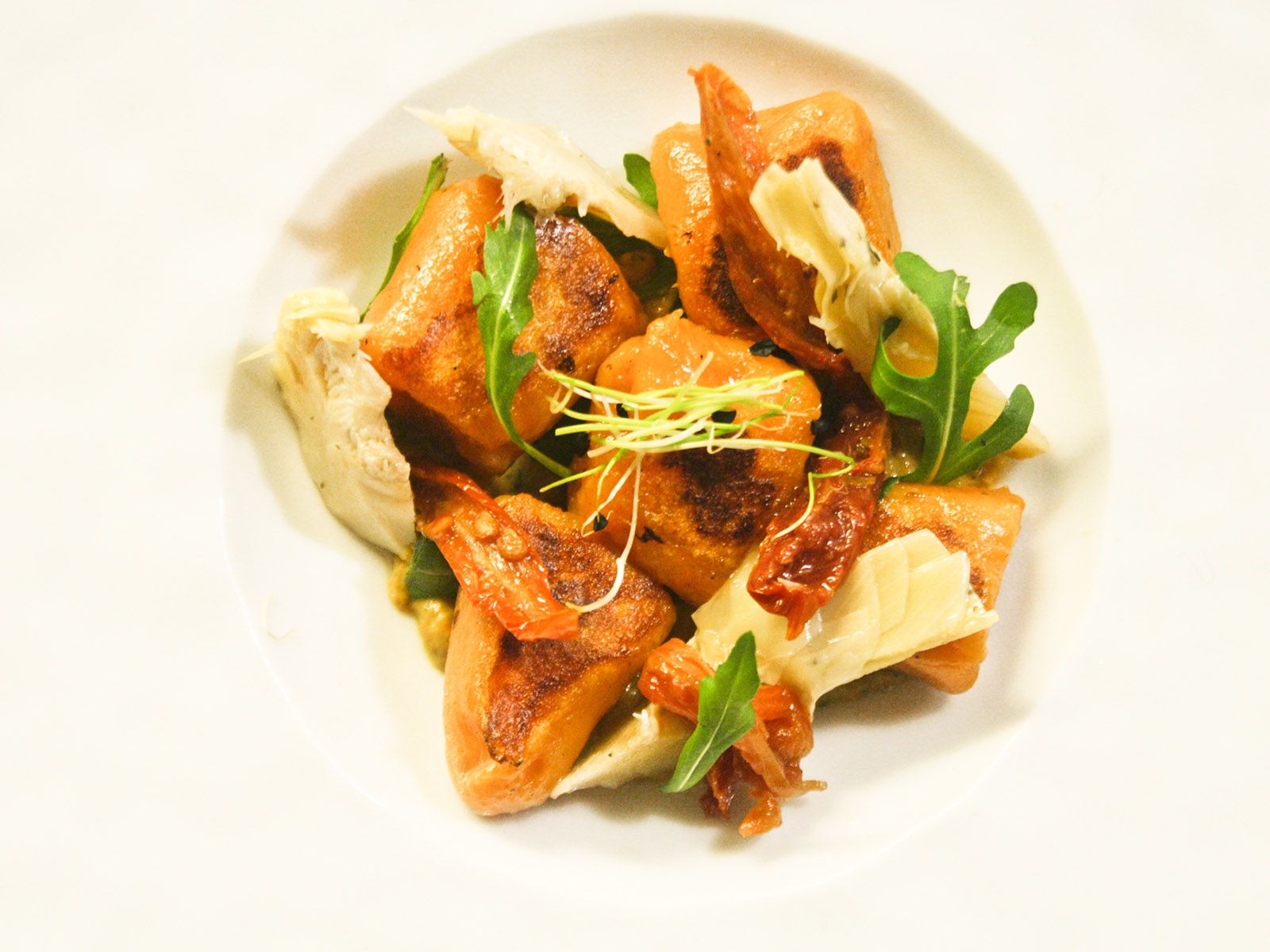 The sweet potato originally comes from the tropical regions of South America. With an annual harvest of around 92 million tons (as of 2018), it is in third place in the world production of root and tuber food plants, after potatoes and cassava. Sweet potatoes can be used in many ways, for example as fine gnocchi.

Let the dough rest in the refrigerator for at least 30 minutes. On a floured work surface, shape the dough into thick strips and cut into pieces about 1 cm in size. Cut small balls 1 cm in length to get the shape you want.

Preheat the oven to 180 degrees and cook the peppers for about 30-40 minutes until they are soft. Wrap in aluminum foil and let cool. Then remove the skin and seeds from the peppers.

Put the peppers, sun-dried tomatoes, garlic and basil in a blender. Mix and drizzle in half of the oil. Add the whole almonds and mix again, adding the last part of the oil and golden chlorella. Season to taste and save for the dressing.

Then heat the olive oil to 80 degrees, add the herbs and artichokes and cook for 45 minutes until they are soft

Bring a saucepan of salted water to a boil and cook the gnocchi for 2 minutes (they should rise to the surface).

Drain the gnocchi, then fry them in a pan with a little olive oil. Finally, add a large tablespoon of pesto and the candied artichokes, which are cut into 6 pieces. Put a spoonful of pesto on the bottom of the plate, place the fried gnocchi and artichokes in a deep plate. Place the rocket leaves and sun-dried tomatoes on top. 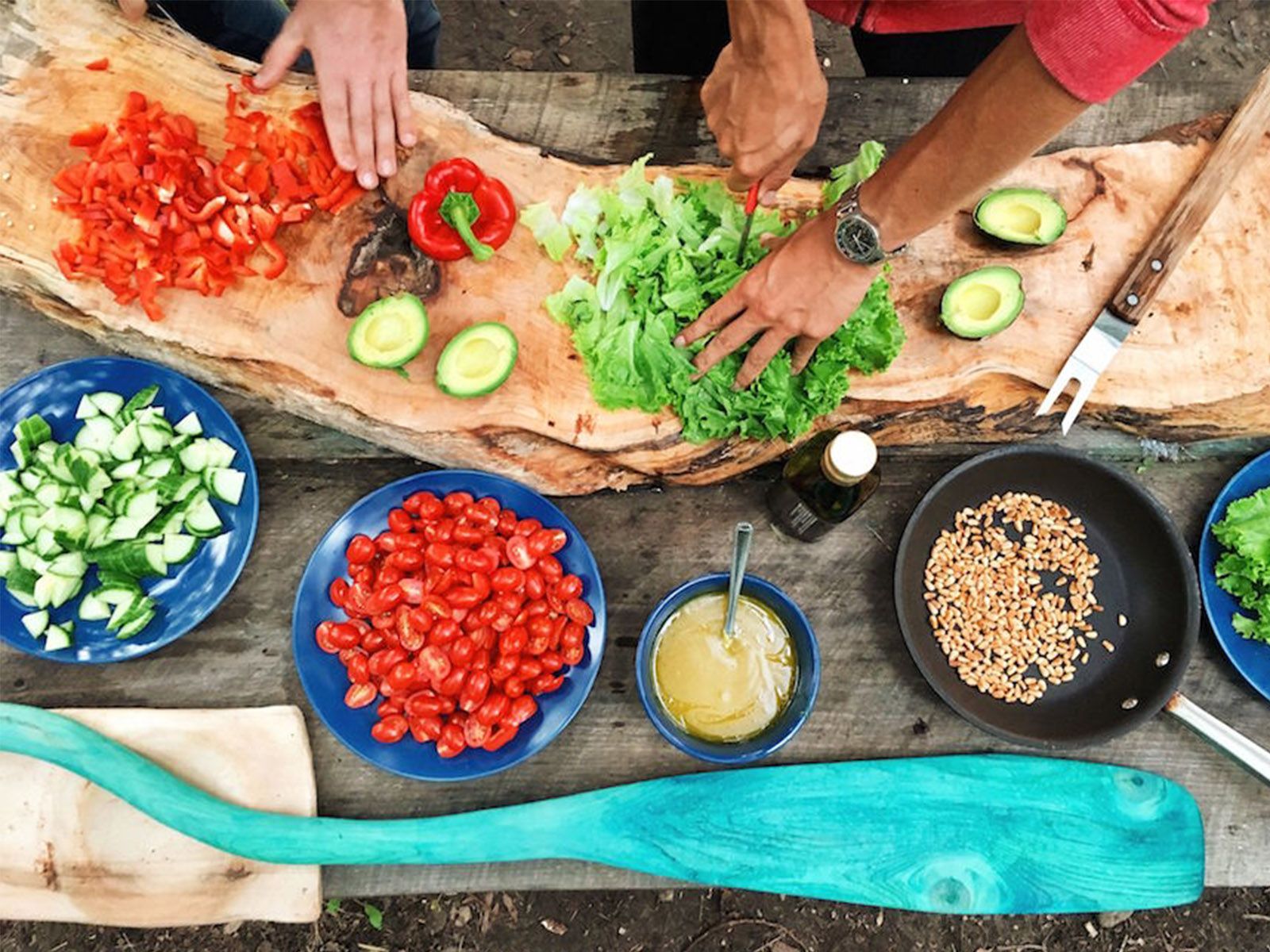 Written by Webmanagement on 23.11.2021. Posted in Main course. Leave a Comment

The Vegan Tex Mex Nourish Bowl is a versatile vegan dish that uses walnuts to create “taco-style meat”. The bowl can be served with a selection of raw vegetables, a salsa made from roasted tomatoes, cooked quinoa and a golden chlorella dressing. The recipe was developed in collaboration with Christine Bailey, an award-winning nutritional therapist, chef, writer and broadcaster with over 18 years of experience.

Cook the quinoa for four people according to the instructions on the packet.

Meanwhile, for the vegan taco meat, put the soaked walnuts, chopped tomatoes, paprika powder, cumin, garlic salt and golden chlorella in a bowl or mixer and mix well. For the dressing, place all the herbs in a blender. Then add the pressed garlic clove, apple cider vinegar, golden chlorella and the vegetable yogurt. Mix well again. Arrange the salad, quinoa and vegan taco meat in a plate. Then add vegetables of your choice, e.g. corn, avocado and paprika, as well as tomato salsa. Pour the dressing over and serve. 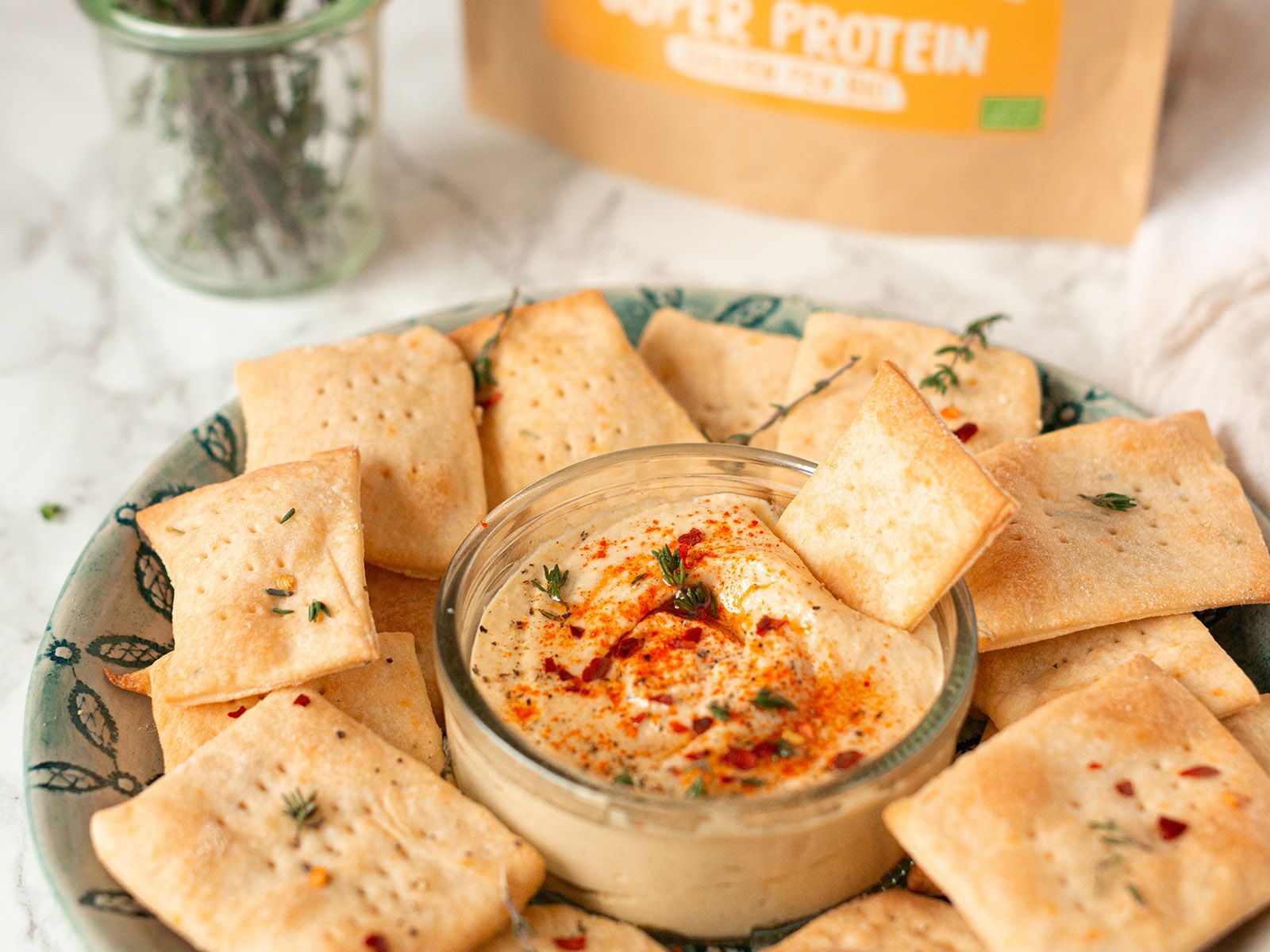 Crackers are the ideal snack between meals – with or without a dip. If they are homemade with herbs and rich in protein, crackers are a real highlight.

Put all ingredients in a bowl and knead briefly to form a smooth dough.

Roll the dough out, about 2 mm thick on a lightly floured work surface. Cut the dough into small rectangles, prick with a fork and place on a baking sheet lined with baking paper. Bake crackers in the middle of the oven for 15 minutes. Then let it cool down briefly and serve with hummus or another favorite sauce. 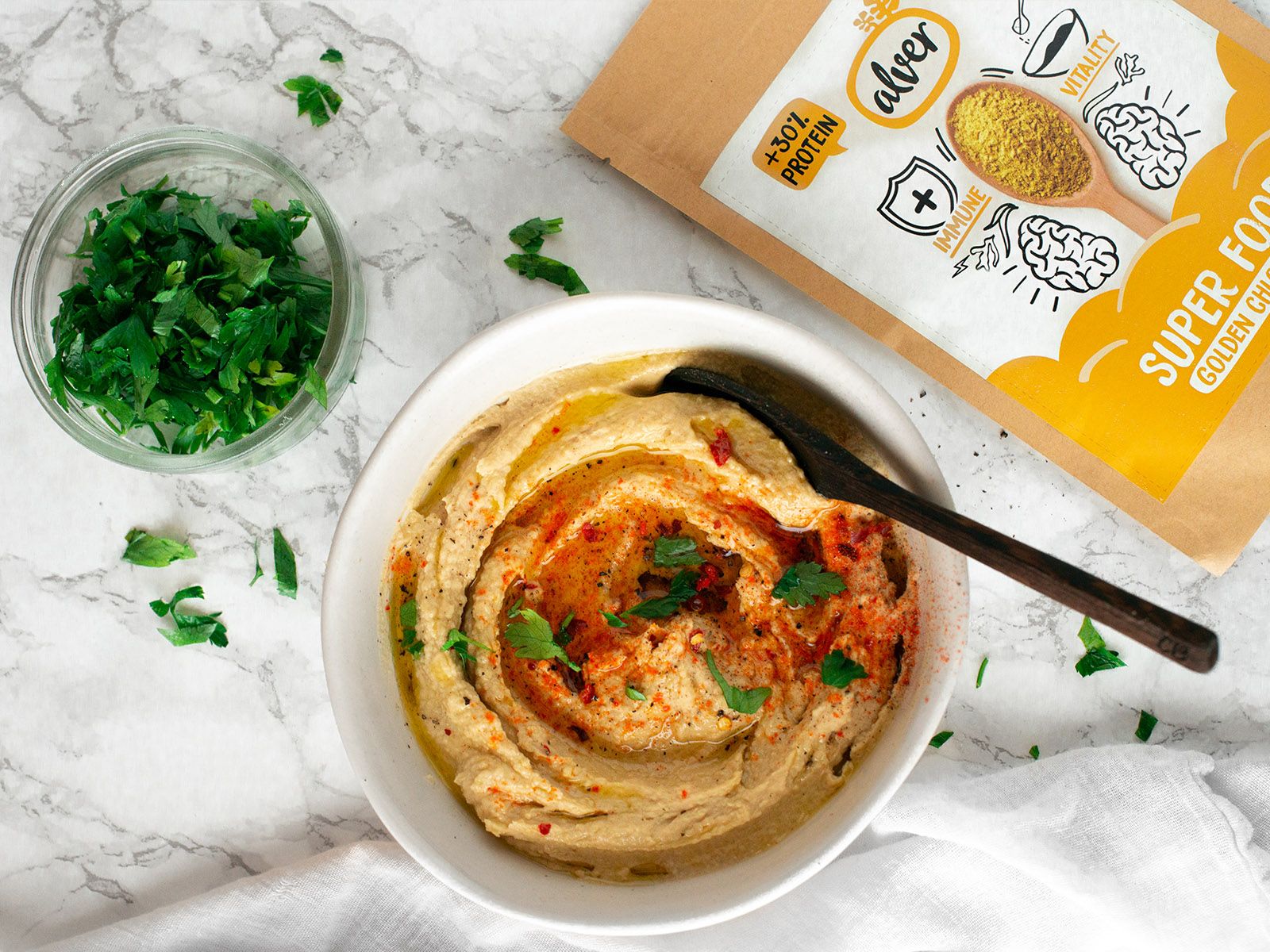 Hummus is an oriental specialty that is mainly made from pureed chickpeas or field beans. Traditionally, hummus is eaten with pita bread, but the dip also goes well with crackers, bread or fresh vegetables.

Put all ingredients in a food processor and puree until smooth. If the hummus is too thick, add a little water or olive oil. Put the hummus in a bowl and serve with some paprika, pepper and olive oil. 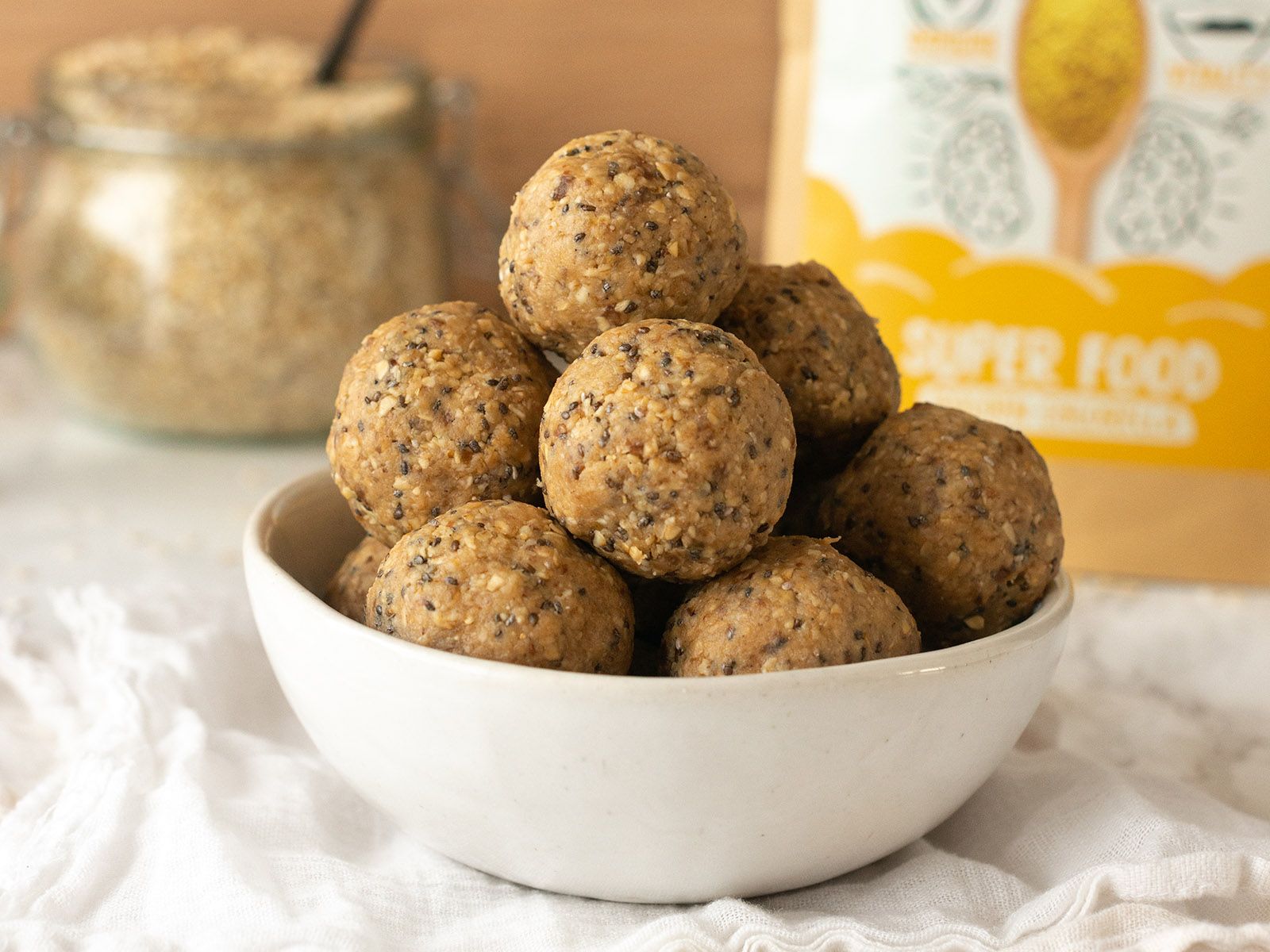 We all know the story: you are hungry, but there is no time for an extensive meal. Power balls are the perfect snack for moments like this. They’re full of healthy nutrients and filling. The preparation is quick and easy.

Put all ingredients in a food processor and mix well.

Shape the mixture into about 1 tablespoon sized balls. Serve immediately or store in a covered container in the refrigerator. 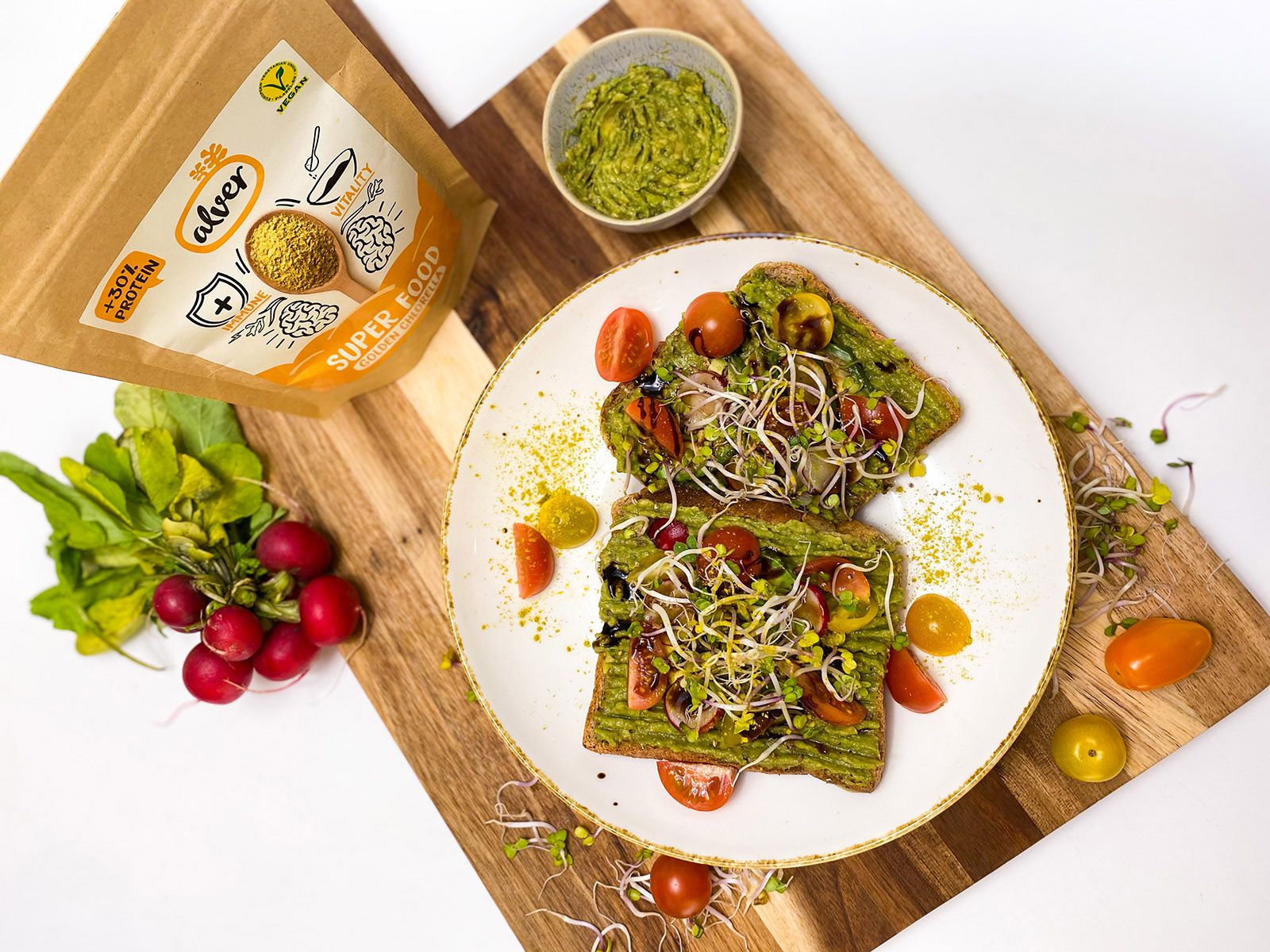 Written by Webmanagement on 23.11.2021. Posted in Breakfast. Leave a Comment

The brunch classic (for 2 – 3 avocado toasts)

Originating in southern Mexico, the avocado tree was already cultivated by the Coxcatlán culture in Tehuacán. The fruit has been used in tropical and subtropical Central America for around 10,000 years. Avocados are now increasingly popular worldwide and are often eaten as a healthy breakfast.

First, mash half of the avocado with a fork to a smooth mass, save the other half for later. Add golden chlorella, garlic, lemon juice, salt and pepper and mix into the guacamole-like bread topping.

When your bread is ready, take the avocado mixture and spread it over your toast. Then spread all the toppings on it: first the avocado slices, then the radish, the tomatoes and finally the herbs. If necessary, season with salt, pepper or chili flakes. Finally, a little balsamic vinegar for extra flavor.

Traditionally, Ragout is meat dish, often in a creamy sauce. The term was borrowed in the 17th century from the synonymous French word “ragoût”. Who says dish needs to contain meat? Over the past few years we have seen some delicious vegan and vegetarian versions created, such as this recipe with eggplant.

In the meantime, peel and finely chop the onion and garlic. Chop the basil leaves and roughly chop the tomatoes.

Drain and add the olives, then drizzle with vinegar. Once the vinegar has evaporated, add the tomatoes and simmer for about 15 minutes until the eggplants are tender.

Serve the ragout with the couscous and sprinkle with the almonds and the rest of the parsley.

Bring a saucepan of salted water to a boil and cook the pasta according to the instructions on the packet. Drain the pasta and oil lightly. Arrange the pasta at the bottom, pour the aubergine ragout over. Garnish with rocket leaves, chopped olives, and crushed almonds. 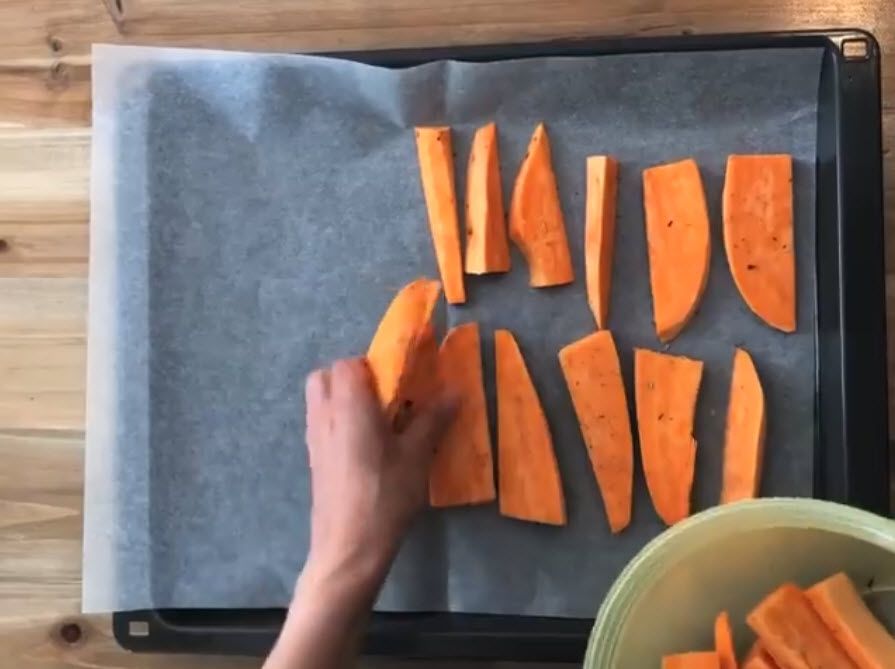 Roasted sweet potato wedges with guacomole are ideal as a healthy snack or as a side dish, for a BBQ lunch of dinner. They are a tasty change from traditional potato fries and wedges, and the addition of guacamole makes it even tastier.

Put all the ingredients in a bowl and mix well so that all of the wedges are coated. Place the wedges on a baking sheet and bake in the oven at 190 ° C for 45 minutes.

In the meantime prepare the guacomole: mash the avocado, chop the tomato, shallots and coriander, mix everything in a bowl and add lime juice. Add 1 tablespoon of golden chlorella for extra protein and texture.

A product of Alver World SA